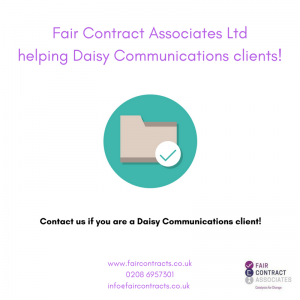 Having been sold on the benefits of VoiP a client leased a telephone system in July 2015 from a Company who were bought out by Daisy Communications, during the integration of the dealer accounts into Daisy’s systems, it seems Daisy allegedly changed the operating platform which resulted in the system ceasing to function in any way as it should.

Daisy’s answer to the service problem they apparently generated was to send in a Salesperson and a Regional Sales Manager (who travelled from North Wales to Kent for the meeting). Between them they misled the client into believing they were going to replace the 7 month old VoiP system with another at no cost to the client, or ‘Cost negative’ as the Regional Sales Manager later described it.

The result was the replacement VoiP system (which was not VoiP but a fixed line version), is costing the client 3 times more over a longer lease period with BNP Paribas Leasing Limited than the original one did.

For 2 years the customer complaints fell on deaf ears, yet during that time Daisy’s own internal management confirmed in internal emails that the deal was ‘wrongly sold’, the Sales manager has confirmed a number of times, the deal was intended to be ‘cost neutral’ and ‘would not cost the client more’ yet still Daisy have refused to address the blatant miss sold agreement.

What is the result of the clients constant appeals for justice? BNP Paribas Leasing said, ‘We are just the financiers, we were no part of the problem, we were not there, go back to the supplier.” Basically, you must keep making the payments or risk legal action.

Daisy Communications, say ‘We did nothing wrong, you signed it, it’s your fault’

And 5 months after they said they could adjudicate on the case, the Telecoms Ombudsman now say the supplier had insisted the Ombudsman could not adjudicate because the client had more than 10 employees when the deal was signed.  NOTE !! The supplier said !!!!

So good people, if you are considering a telecoms equipment purchase, choose your supplier very carefully.

If you are considering using lease finance to obtain the equipment and expect any post sale care or support when things go wrong, think very, very carefully about the leasing company you engage with.

If you are a limited company and you expect any support from the Ombudsman service, you best check you meet the ludicrous criteria and if it appears you do, then do not expect that what the Ombudsman Service might tell you they can do is anywhere near what the supplier will allow them to do.

If you have a system from Daisy Communications and you are experiencing service issues, do not believe that the presence of any regional sales manager might be beneficial to you.

As for this client, we will continue to support them through the media and the courts to have both Daisy Communications Ltd and BNP Paribas Leasing Ltd reimburse and compensate them for this gross injustice.

Please contact us if you are a Daisy Communications client; we are here to help you!